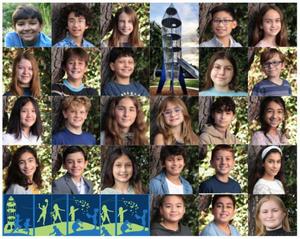 
As members of the Crestview community, these graduates have successfully run Crestview’s birthday party for the entire school.  They leave behind a series of documents for next year’s class to help them run the event.  They also have jump started our schoolwide composting program leaving behind another legacy to future classes. They were also leaders in our Eco Club, musical ensembles, and debate team.


This class has shown tremendous responsibility as scholars, athletes, musicians, and debaters.  They have juggled their high level academics with outside interests.  In this class, we celebrate choral singers, debate leaders, baseball champions, soccer players, dancers, and aerialists.  They have made us proud on the field, in the classroom, and at a variety of performance venues.


The empathy of these young people was displayed in their efforts to help build a well for people needing clean water in South Sudan.  They were touched by what they heard and learned, and they became determined to help.  By educating their fellow students through stories and presentations, as well as educating the broader Crestview community with their research and writing, they raised $2020 which will complete a well for a school in South Sudan.


Their sincerity as a group shines through.  They were recently presented with the opportunity to write thank you notes to two people at Crestview who had an impact of them.  They immediately asked to do more than two people and wanted to make sure that every adult at Crestview was acknowledged for their efforts this year.  The students displayed their authenticity in this heartfelt greetings.


Finally, this is a class of thinkers. As was on display at Open House, they conceived and ran science experiments based on their interests using the scientific method.  They also created social studies projects to explain Ancient India, Mayan, Aztec, and Ancient Inca cultures.  They created parody songs, skits, and animated presentations.


Well done and congratulations class of 2022!