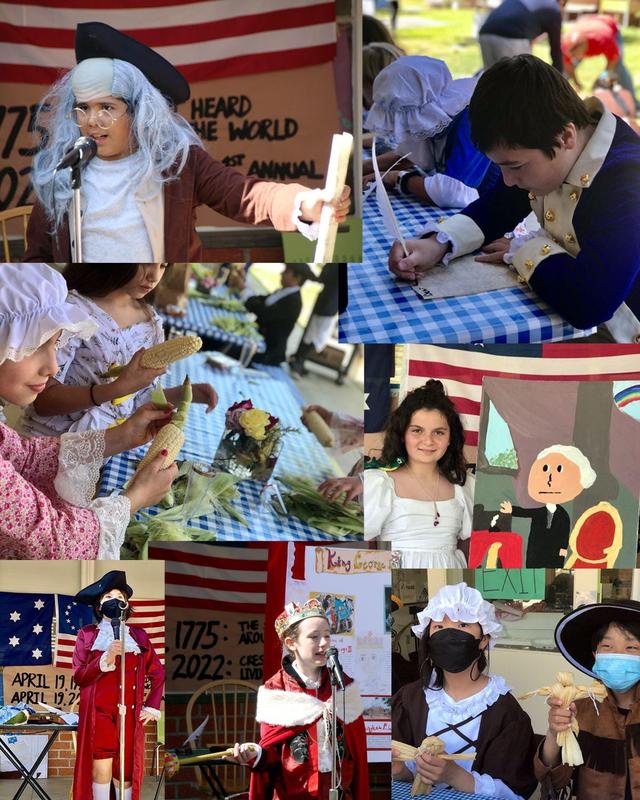 
The day was meant to invite Fifth Grade parents into our learning process, inviting them and encouraging them to be lifelong learners along with the Fifth Graders. Parents took a "Walk Back in Time" as they found their chairs on the lawn outside the Fifth Grade classrooms, viewed students' Colonial trade group projects, individual Colonial trade signs, and students' Boston Massacre reverse propaganda art pieces.


In preparation for the morning presentation, students each selected a historical figure from American history from 1609-1812 to research and identify what we can learn from these people in the past--courage, determination, the downside of pride, etc. Most of our Fifth Graders chose to give first-person historical interpretations of their characters. Some students chose to prepare a presentation board with pictures and bullet points and share about their historical figure in the third person. Other students worked with partners to put "History on Trial": History vs. Ann Putnam, Jr. (accuser in the Salem Witch Trials), History vs. Sam Adams (founder of the Sons of Liberty), History vs. George Washington (Continental Army General, First U.S. President, and plantation owner), and History vs. Aaron Burr (Founding Father who killed Alexander Hamilton in a duel). Led by Mrs. Contreras, students sang a comedic 18th century ditty: "Will You Marry Me?" and led by Mr. Nunez, students played "Yankee Doodle Dandy" on drums and fifes.


Following the two-hour presentation, Fifth Graders shucked corn in a simplified "husking bee" and played 18th Century games (Hoop and Ball, Game of Graces, and Trap Ball) on the backfield, then tied 18th-Century-style yard napkins around their necks and used three-tined forks to eat a feast prepared by parent volunteers. Students drank squash (a drink made from squashed fruit - combination of orange juice and lemonade), feasted on meat pasties, fried chicken, and enjoyed homemade bread pudding. The day concluded with students rotating through five hands-on history stations: Tin-Punching and Beeswax Candles, Corn Husk Doll Making, Writing with Quill Pens and Sealing with Wax, and experiencing games Native American and enslaved children of the period would have played.


In learning about the times, the people, and the events of the past in such a rich way, we hope to empower our Crestview Fifth Graders with understanding, empathy, inspiration, and motivation to make the world of their future a better world than it ever was in the past. We want to share the power of stories of real people who grow and show resilience, and we want them to see history isn't stagnant and it isn't boring. We look forward to continuing this brand new tradition of a Living History Day with next year's Fifth Graders.